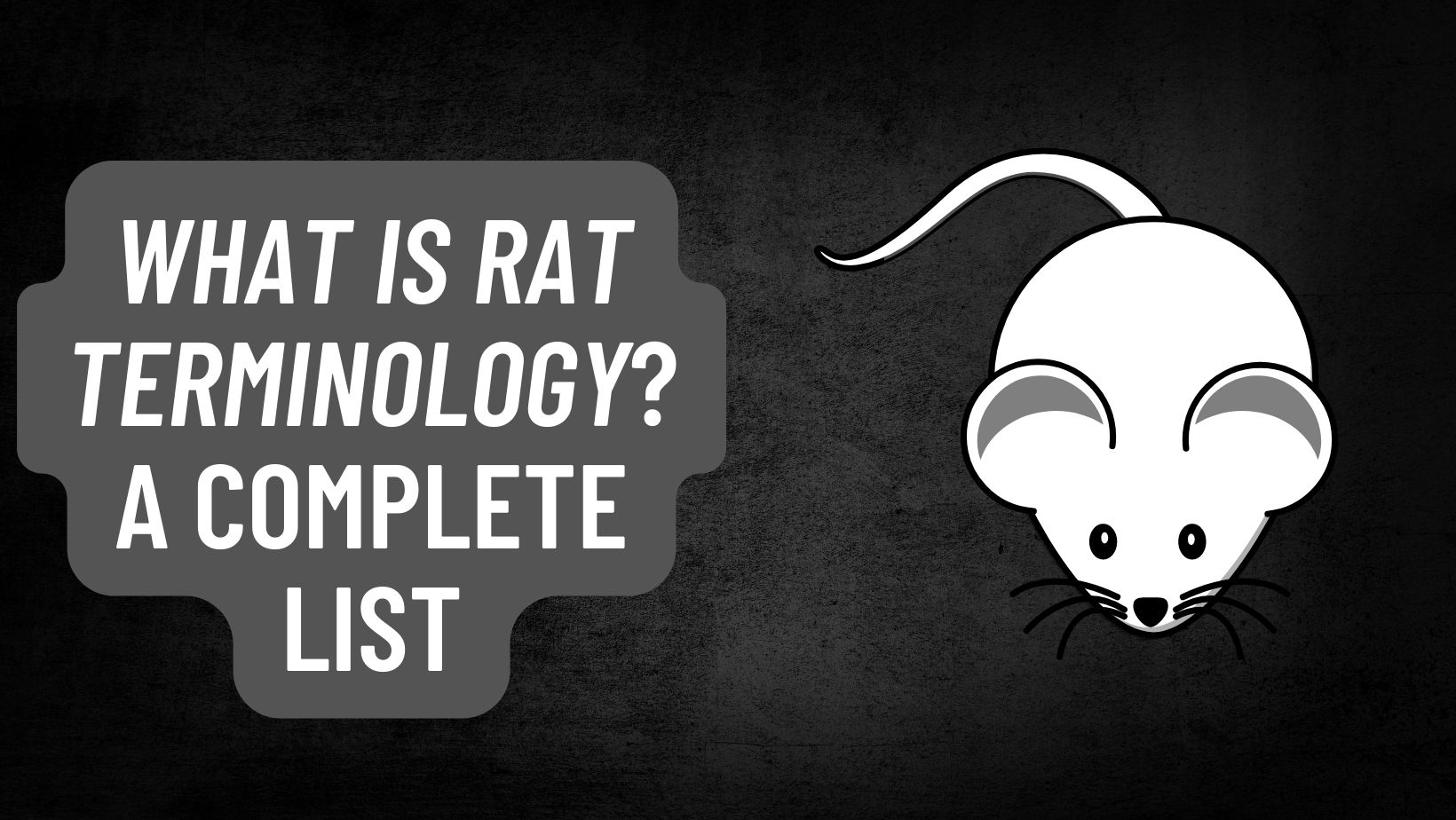 The wild color of rats. It appears brown from a distance but the color is caused by bands of color on the individual hairs.

Variations of a gene.

Being helpless, blind, and hairless at birth. (Opposite of precocious.)

When a rat pulls out his own fur the fur of another rat.

Abbreviation for black-eyed-white, a variety of rat that results from white marking genes.

Grinding teeth (often accompanied by bulging eyes and licking lips), which rats do when very relaxed and happy or when nervous.

Most active at dawn and twilight.

(1) The rat who is “in charge,” the “alpha” rat. (2) A genetic trait that is expressed even when the genotype is heterozygous.

Variety of rat that has ears placed more on the side than the top of the head. Ears also are shaped differently than standard rats’.

Usually refering to a wild animal from another country or a non-domesticated animal that is bred in captivity to be kept as pets. The term “exotic” is now used (incorrectly) to identify all pets that are not livestock or cats or dogs.

A portion of DNA that acts as “instructions” to build a single protein (which in turn, defines a single trait or group of traits).

The genes that make up an organism.

The length of pregnancy from conception to birth.

A condition in which a rat’s head is tilted at an angle (not swaying, which is normal behavoir for focusing). Usually caused by an upper respiratory/sinus/ear infection.

The period of time when a female is receptive to a male and can become pregnant.

Baby rats. A term used most by European breeders. (In America, they are usually called pups.)

Pelleted food made specifically for rats and mice.

Alleles of genes that result in death of rats with a certain genotype (usually homogenous) either before birth or while the rat is young (before sexual maturity). 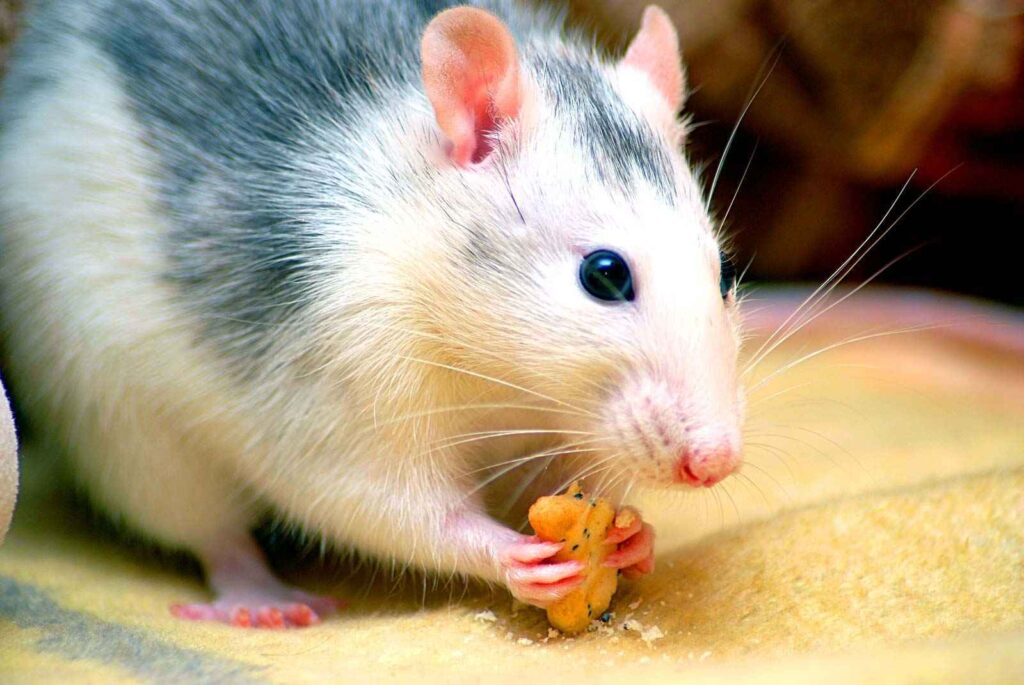 The offspring born to one mother at one time. (2) The substrate used in a litterbox or in the bottom of a cage to control moisture and odor.

The location of a gene on a chromosome.

A genetically tailless (not simply docked) rat. Manx rats include rumpies (having no tail at all), stumpies (having a stub, resembling a hamster tail), and risers (having an end vertebrae that rises up).

The branch of genetics associated with Mendel. The study of heredity.

Engaging in “mock mating,” done by both genders in play or dominance.

Short for Mycoplasma Pulmonis, a bacterial infection all pet rats carry, but most do not show symptoms unless they are stressed, old, or have another infection.

Being most active at night.

Having two different colored eyes (like one red and one black or one pink and one red).

Abbreviation for pink eye dilution, a gene that results in champagne rats, pink-eyed fawns, and silvers.

The known family history of a rat (or any other animal) including parents, grandparents, great grand-parents, etc.

A pedigree that contains unknown information (example: grandparents on one side are unknown).

Abbreviation for pink-eyed-white, usually referring to an albino rat.

The oils in pine, cedar, and other softwoods that cause liver damage and respiratory problems in small animals.

A description of an organisms charateristics (regardless of hidden/carried recessives).

Newborn rats before their fur grows in, usually used to describe this size/age of feeder rats.

The red discharge that comes from a rat’s eyes and nose when he is sick, stressed, or has an allergy or sensitivity to something.

The heat cycle rats go into immediately after giving birth.

Baby rats. A term used most by American breeders. (In Europe, they are usually called kittens.)

Rats bred specifically to follow set standards and to be good pets. (Pet stores often label colorful rats as fancy and albinos or black rats as feeders, but this labeling is used incorrectly.)

Rats bred and/or sold for the purpose of being food for another animal. (Pet stores often label colorful rats as fancy and albinos or black rats as feeders, but this labeling is used incorrectly.) Feeder rats are sold according to size.

Some terms used to categorize them are pinkies, fuzzies, weanlings, small, medium, large, and jumbo.

Rats bred for the use of experimentation or scientific observation. (Same species as feeder and fancy rats.)

Any rat of the species Rattus norvegicus. Usually is used only to describe the wild rats, not their domesticated counterparts.

Any domestic rat being kept as a pet.

A genetic trait that can be masked by more dominant genes. Recessive traits can be carried.

A database of individual rats used to track pedigrees and health information or for the purpose of entering shows.

Having a rat that is not ready for adoption yet held for you so no one else can adopt him.

Rats with curly or wavy fur and whiskers.

Abbreviation for the Sialodacryoadenitis Virus, a highly contageous (to rats) upper respiratory infection that causes swelling of the throat and eye problems. SDA is not fatal, but allows for myco and other secondary infections to flare up and possibly kill.

A contageous virus that affects rats and mice and is similar to distemper.

A male rat that a breeder borrows for breeding.

List of people who are interested in adopting a rat or rats from a current or future litter. 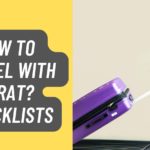 How to Travel with a Rat? Checklists In 2022 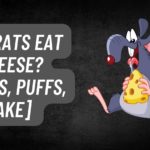